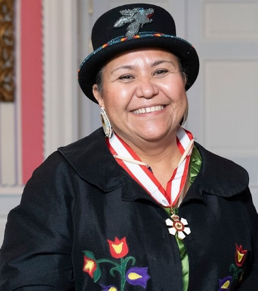 Dr. Carol Hopkins is the executive director of the Thunderbird Partnership Foundation and is of the Lenape Nation at Moraviantown, Ontario.  Carol was appointed Officer of the Order of Canada in 2018.  In 2019, she was recognized with an honorary Doctor of Laws from Western University. Carol has spent more than 20 years in the field of First Nations addictions and mental health.  She holds both a Master of Social Work degree from the University of Toronto and a degree in sacred Indigenous Knowledge, equivalent to a PhD in western based education systems.    Carol also holds a sessional faculty position at the School of Social Work at King’s University College at Western University.

Carol has co-chaired national initiatives known for best practice in national policy review and development, resulting in the First Nations Mental Wellness Continuum (FNMWC) framework, the Honouring Our Strengths: A Renewed Framework to Address Substance Use Issues Among First Nations People in Canada, the Indigenous Wellness Framework, and best practice guidelines for culturally based inhalant abuse treatment. Carol has also inspired the development of the Native Wellness AssessmentTM. In recognition of this work, she received the Champions of Mental Health Award 2015 for Research/Clinician, the Health Canada Innovations Award, was a member of the leadership advisory council to the Ontario Minister of Health and Long-Term Care and was part of the Canadian delegation to the 2016 United Nations General Assembly, Special Session on the World Drug Problem.  Carol also participates on a national mental health advisory council to the federal Minister of Health.